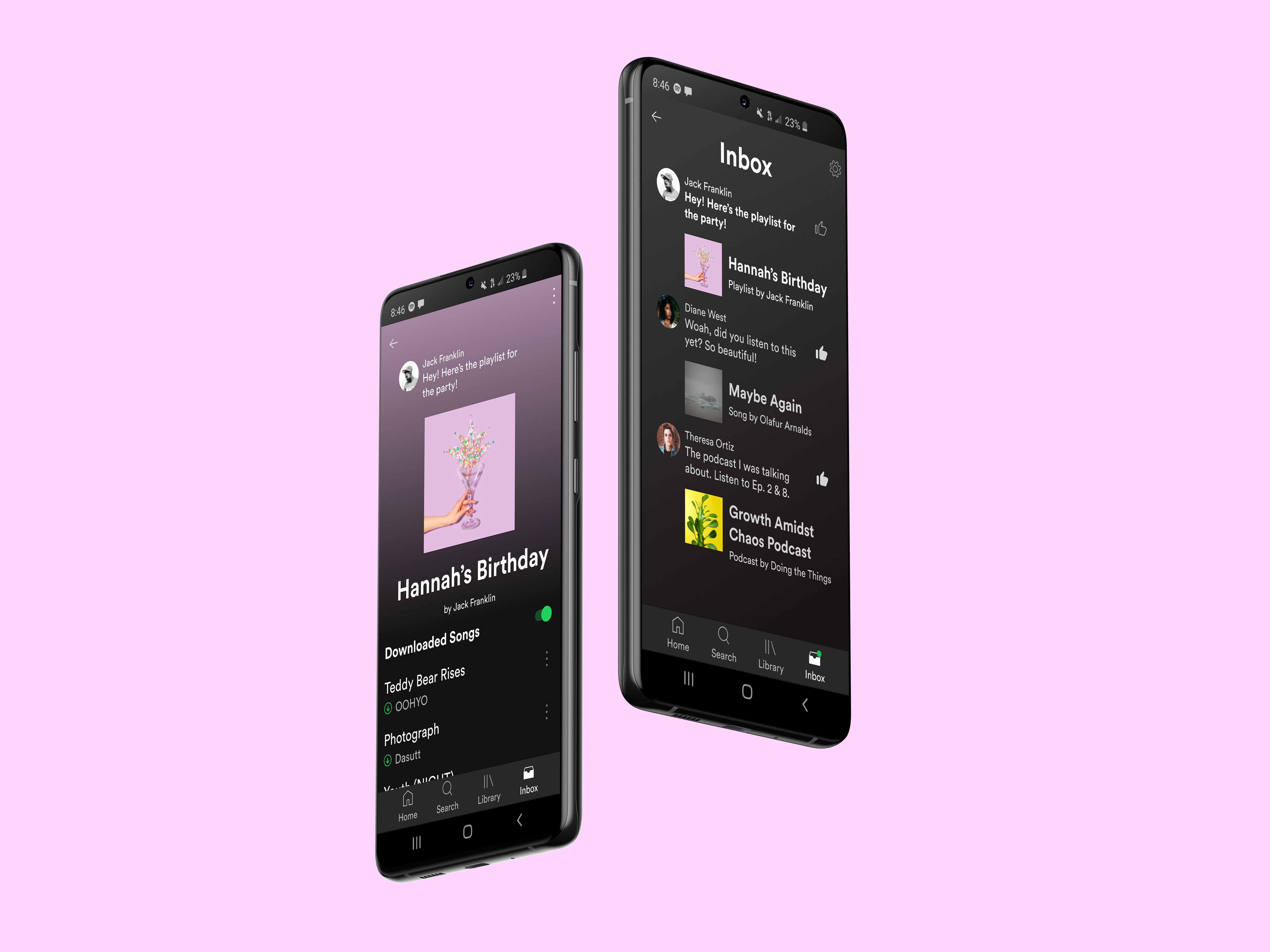 Adding a feature to an existing product.
Project Overview
Music is personal. For many, it's expression. For other's it's an escape.
We were tasked with adding a social feature to Spotify — with a focus on the emotional and human power of music to connect users with others and themselves.
Details
Role: UX/UI Designer
Client: Design Lab UX Academy
Duration: 2 weeks, March 2020

Tools: Figma, Sketch, Whimsical
Problem
Spotify’s mission is: “to help people listen to whatever music they want, whenever they want, wherever they want—in a completely legal and accessible way.” As a streaming music service, Spotify is the lead, and it wants to stay that way. For this reason, they want to improve engagement and retention in the app. In order to do that, they want to expand on their social capabilities.

The goal of this project was to help Spotify define what direction to move in and then provide a prototype of that added feature, integrated seamlessly within the rest of the app.
Objectives
- Research and observe user behaviors with music streaming and song sharing.
- Develop a feature that allows users to interact without disrupting
the main purpose of Spotify.
- Design the feature to be accessible, intuitive, and natural to the
Spotify user's need and patterns.
Goal
How might we create an experience that allows users to engage and connect with one another in order to enhance their listening and discovery experience? 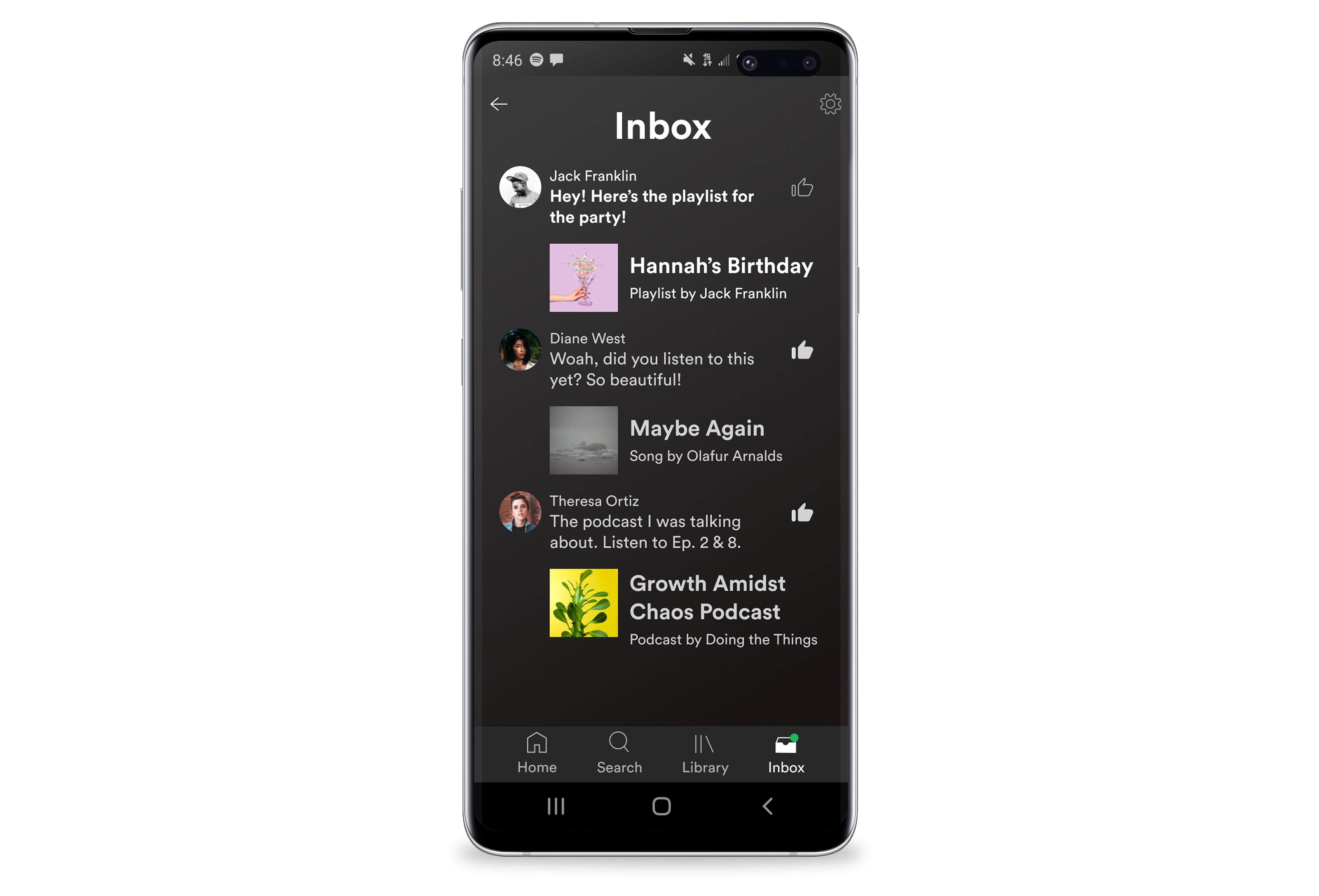 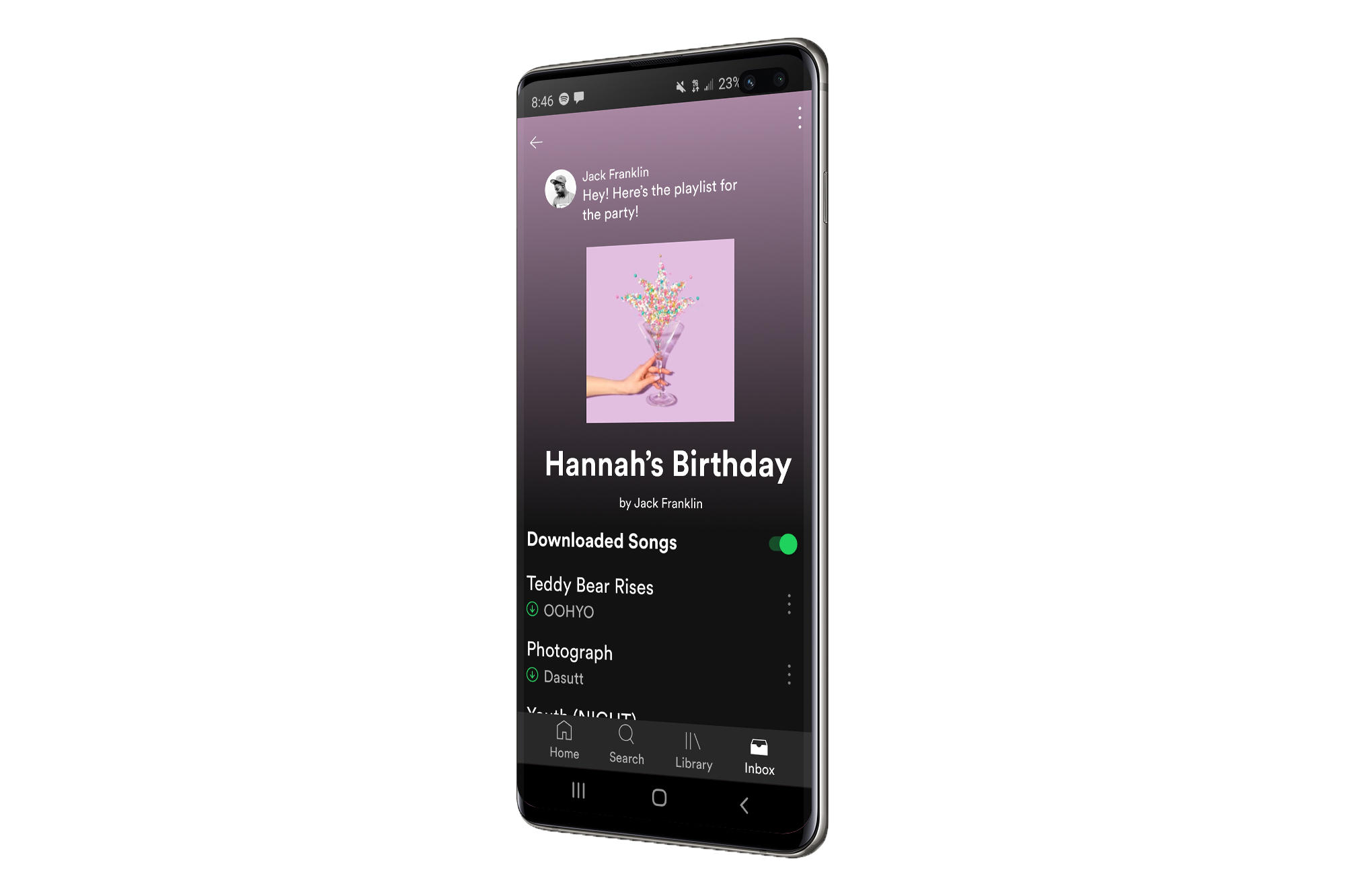 see my prototype
Needs
- Ability to make songs listened to, private.
- Ability to toggle any sort of notification off.
- Able to sync to all devices.
‍
Wants
- The most variety in music, from international to indie labels.
- An aesthetic that feels welcoming yet easy to use. Obvious.
- To be able to have multiple ways to share music.
Playlists, songs, artists, but also different platforms.
- To remember songs and podcasts recommended by friends—
then to not have to respond but just “like” the send.
‍
Desires
- For the app to stay as clean as possible and not be overcrowded
or “filled with friends.” Almost prefers that sharing functions are hidden.
- The camaraderie of “Oh, you listen to that too?”

According to Nielsen Music and MRC Data's 2019 Year-End Music Report, Americans streamed nearly 1.15 trillion songs, which marks a 29 percent increase from 2018. As streaming platforms continue to see growth, they will have to navigate how users continue to want as many options in artist available as possible, as well as how to integrate the social aspect without overwhelming users.
‍
Apple Music seems to be the biggest competitor because of brand recognition and loyalty, but Tidal is making a strong case for those that care about music quality and artists receiving more pay per track. Soundcloud still remains a favorite for indie listeners that want to interact with artists and connect with others within the product.
‍
The industry will have to adapt to the demands of users
as the most innovative could take the next year’s increase in streaming. 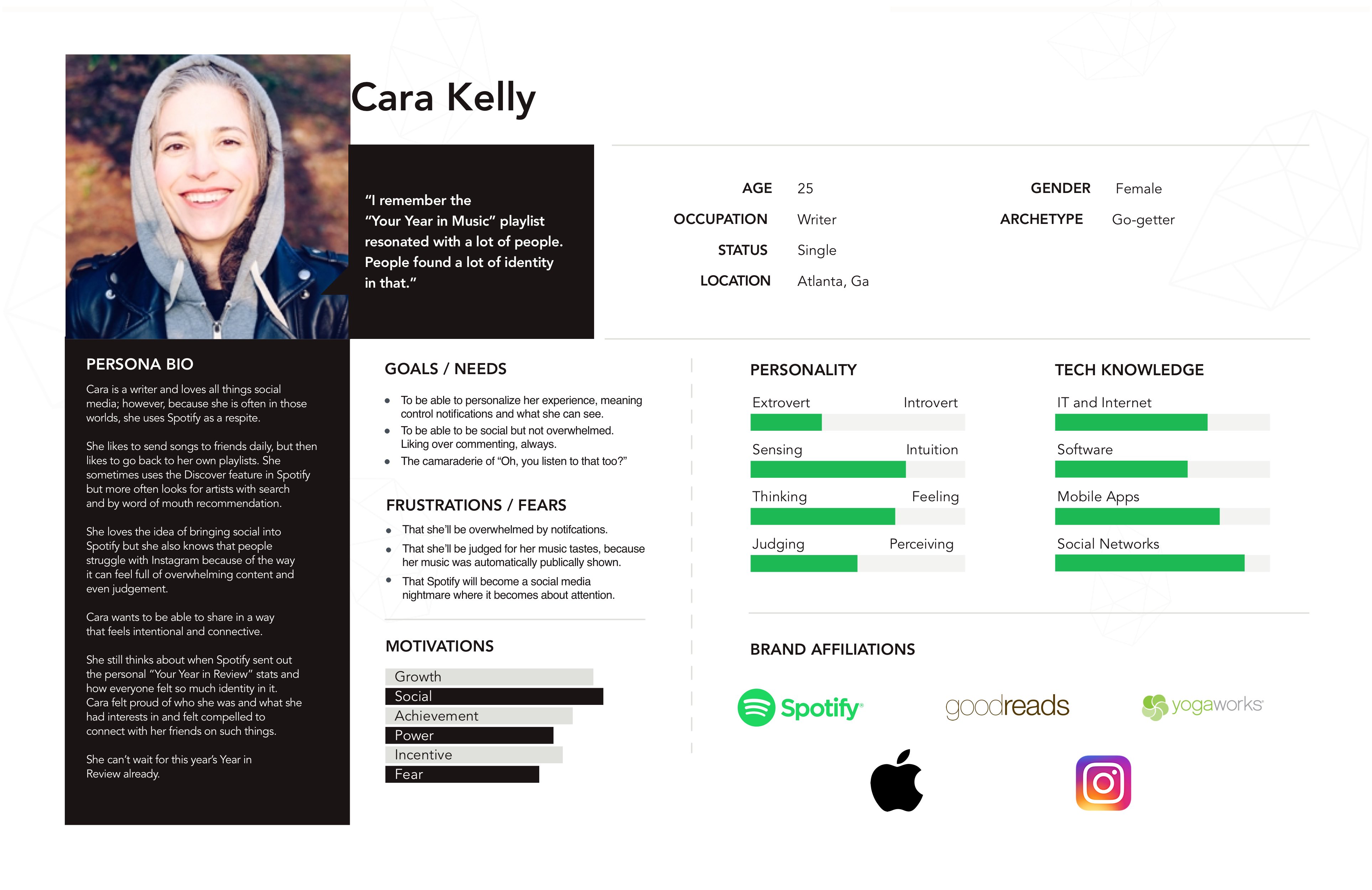 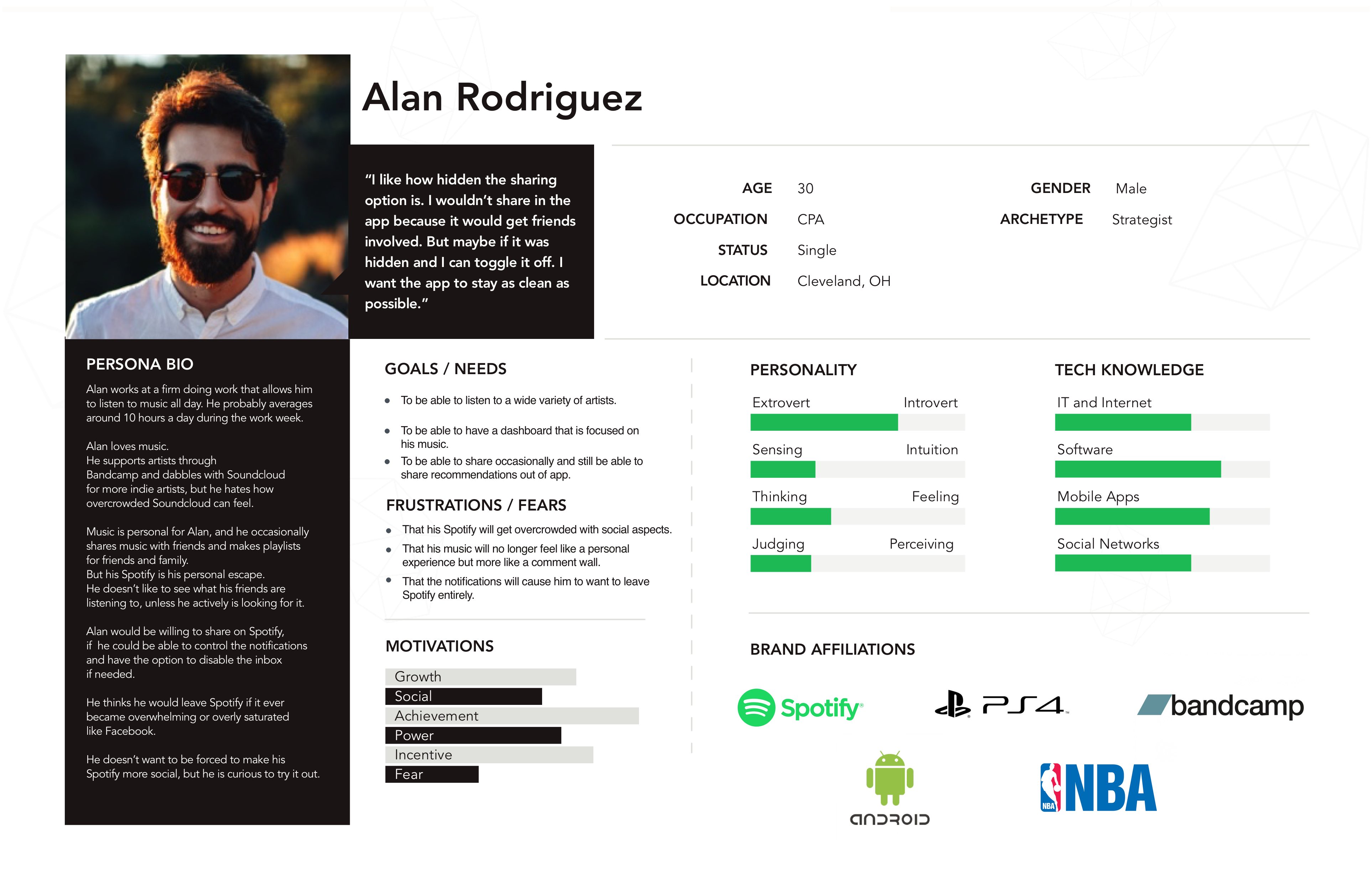 After talking to users, we saw users tend toward two personas.
Cara values the connection and camaraderie of music but can also feel overwhelmed by social media and is afraid others will judge her music tastes.
Alan wants to focus on his music, and he wants Spotify be his audio escape. Though he would use this feature, he would need the ability to turn off notifications or even disable the feature.
Opportunities for Improvement
‍- Send to Friends:
A slide-in window where the bottom half that has a search bar and recommended friends to share with.
Send and share would would be shown with different icons/button entirely.

- Ability to disable the inbox or to receive messages but opt out of notifications.
- A way to help the recommendations resonate with users, a connective experience. Something akin to “Your Year in Music.”

- Song recommendations can be consolidated into a “Shared with You” tab and playlist.

- An inbox of messages that can be opened and checked if users want to interact with it, but no pop ups or notifications unless users opt in to be notified.
Define
Feature Roadmap 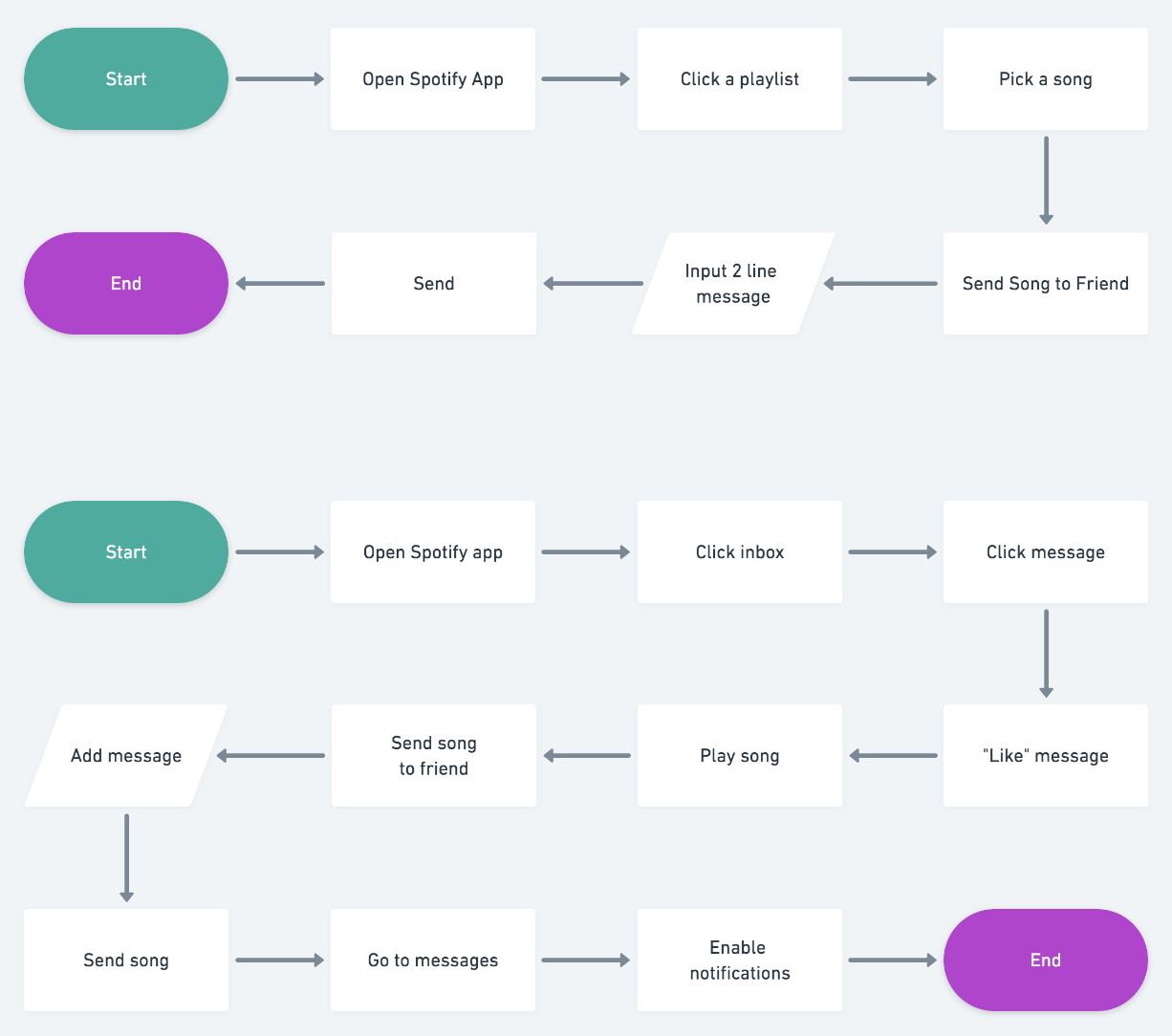 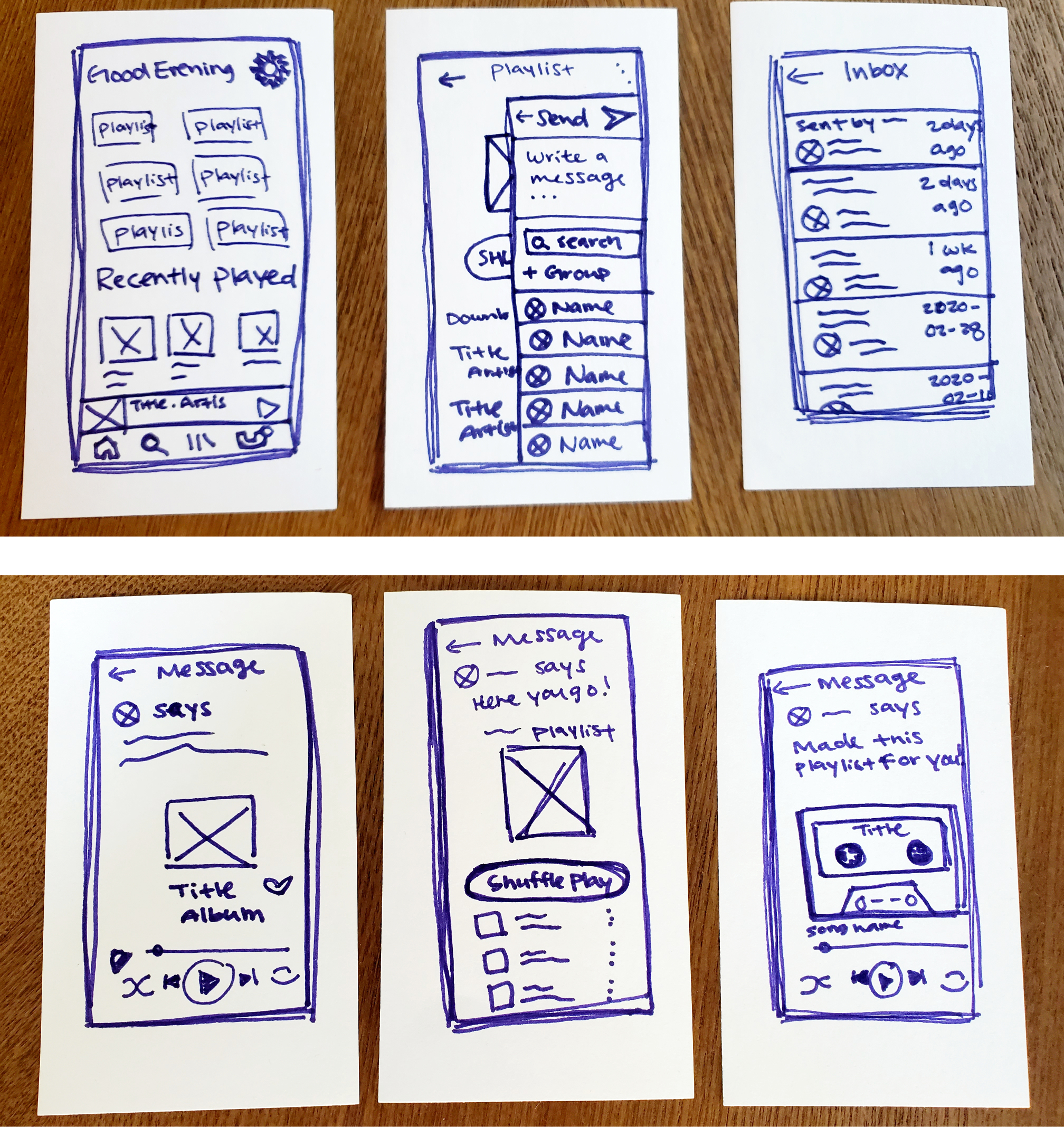 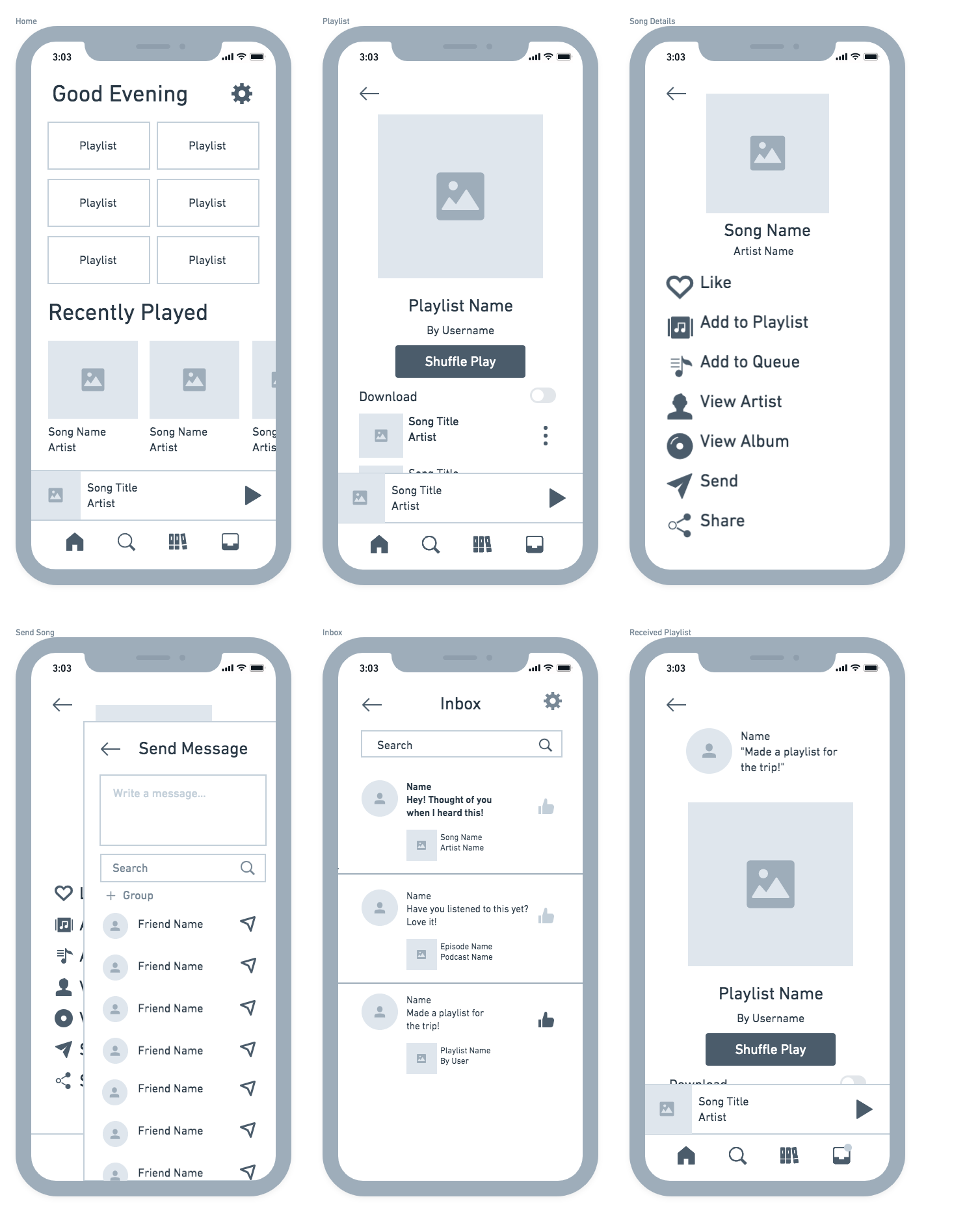 Test
Usability Testing
Test Plan
Test Results
Test Goals
- To observe users’ interactions with the app and evaluate
their experiences with the new messaging feature.
- To identify potential pain points.
- To define the quality of accessibility, flow, navigation,
information architecture, and general design of the addition. 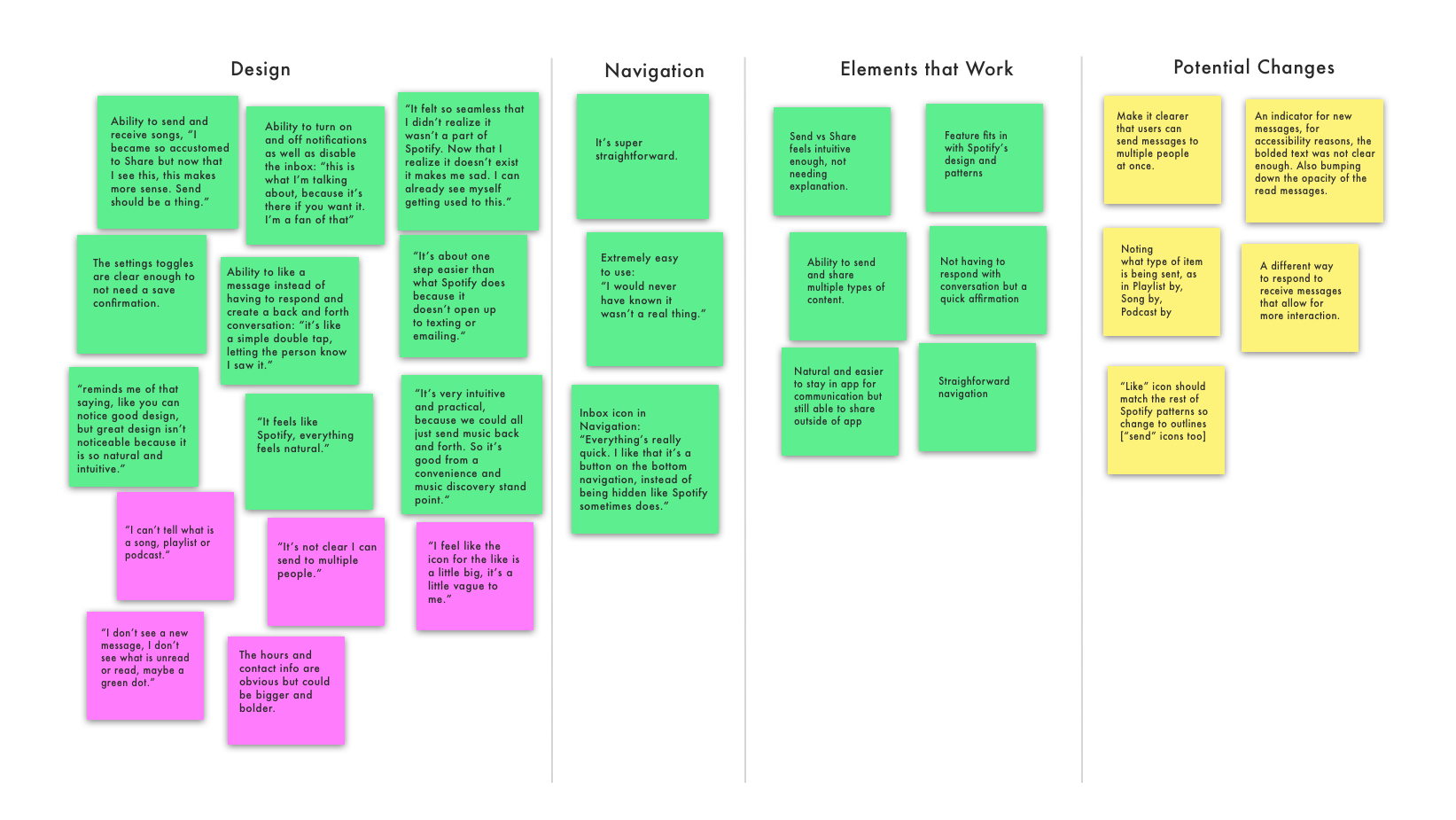 Iterate
Next Steps & Prototype
- Make it clearer that users can send messages to multiple people at once.
- An indicator for new messages, for accessibility reasons, the bolded text was not clear enough. Also bumping down the opacity of the read messages.
- Noting what type of item is being sent, as in Playlist by, Song by, Podcast by
- A different way to respond to receive messages that allow for more interaction.
- Like icon should match the rest of Spotify patterns so change to outlines [send icons too]
see my prototype
Questions for Future Iterations:

How might we create an increased sense of camaraderie?
Maybe a tab that houses all the songs shared with you, think Google Drive or Dropbox. If one person shares enough or a group shares enough, that forms it's own playlist.
A rhythmic algorithm of relationships.

How might we create features for the sole purpose of delight?
Maybe create the ability to toggle between listening to sent playlists as mixtapes where you can't see what's coming next. It would feel nostalgic, like listening to a gifted CD and being surprised by what songs will come up. 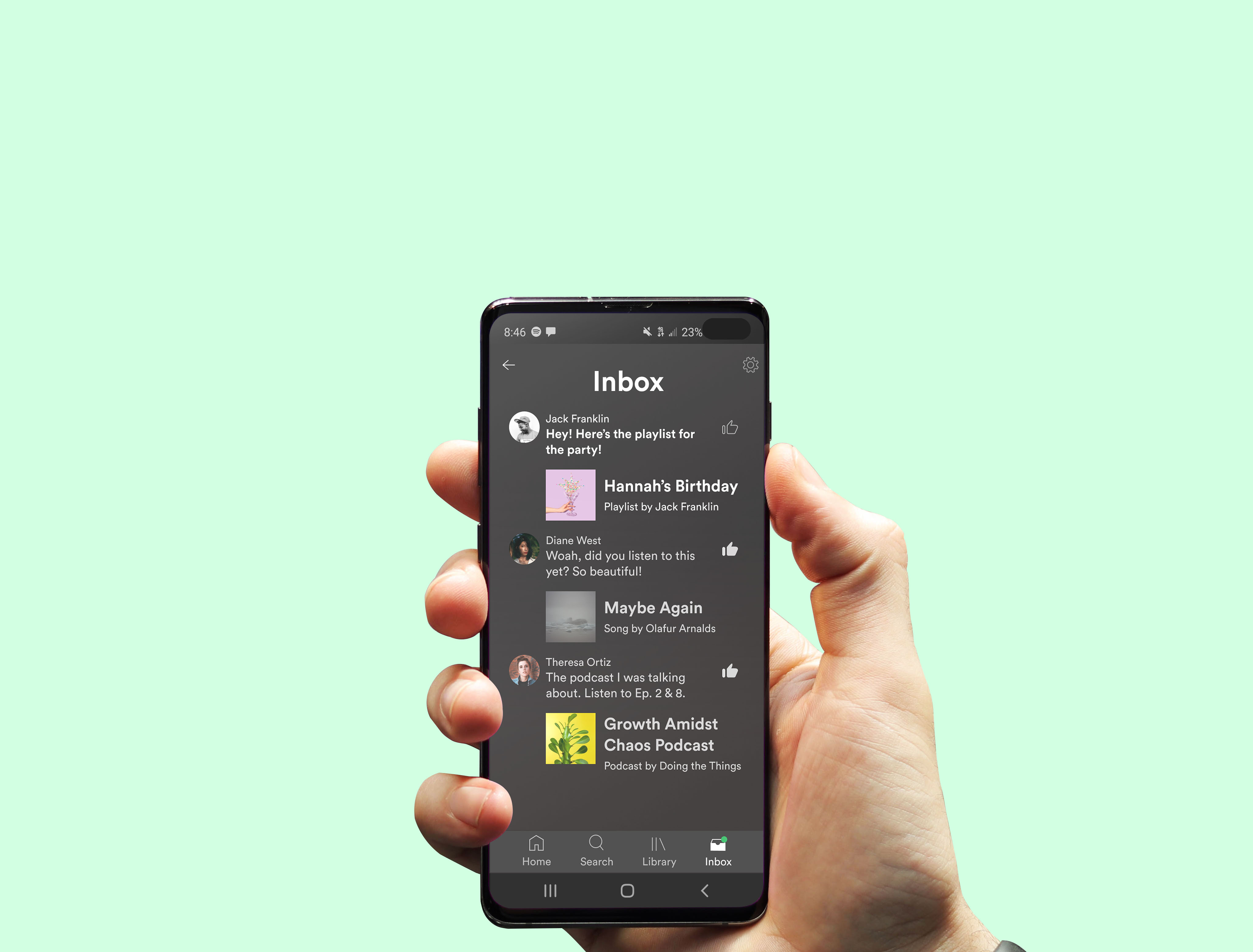 HomeAboutWorkWriting
Made with 💕, ☕, and lots of 💃🏻
©2023 all rights reserved